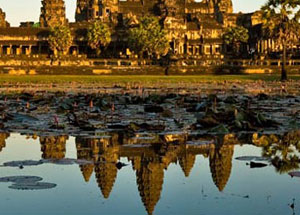 Angkor Wat is a temple complex in Cambodia and one of the largest religious monuments in the world, on a site measuring 162.6 hectares (1,626,000 m2; 402 acres). It was originally constructed as a Hindu temple dedicated to the god Vishnu for the Khmer Empire, gradually transforming into a Buddhist temple towards the end of the 12th century
More >>> 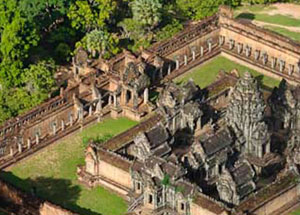 Banteay Samré is a temple at Angkor, Cambodia, located 400 metres to the east of the East Baray. Built during the reign of Suryavarman II and Yasovarman II in the early 12th century, it is a Hindu temple in the Angkor Wat style.
More >>> 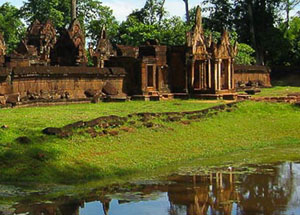 Banteay Srei (Banteay Srey) is a 10th-century Cambodian temple dedicated to the Hindu god Shiva. It lies near the hill of Phnom Dei, 25 km (16 mi) north-east of the main group of temples. This temple is extremely popular with tourists, and have led to its being widely praised as a the “jewel of Khmer art. 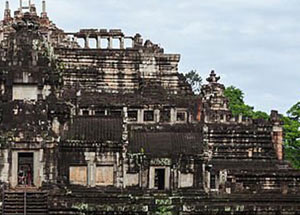 The Baphuon is a temple at Angkor, located northwest of the Bayon. Built in the mid-11th century, it is a three-tiered temple mountain built as the state temple of Uday Adityavarman II dedicated to the Hindu God Shiva.
More >>> 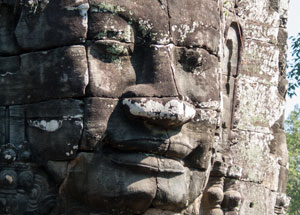 The Bayon is a richly decorated Khmer temple built in the late 12th or early 13th century as the state temple of the Mahayana Buddhist King Jayavarman VII, the Bayon stands at the centre of Jayavarman’s capital, Angkor Thom
More >>> 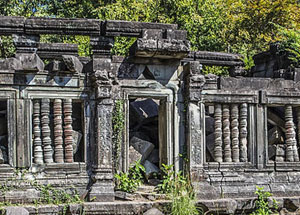 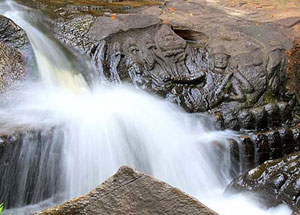 (“Bridge Head”) is an Angkorian era archaeological site on the southwest slopes of the Kulen Hills to the northeast of Angkor. It is situated along a 50 metres (160 ft) stretch of the Stung Kbal Spean River, 25 kilometres (16 mi) from the main Angkor group of monuments.
More >>> 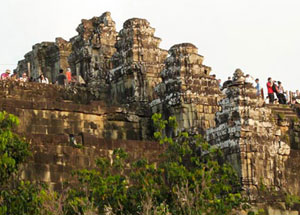 Phnom Bakheng is a Hindu and Buddhist temple in the form of a temple mountain. Dedicated to Shiva, it was built at the end of the 9th century, during the reign of King Yasovarman (889-910). Located atop a hill, it is nowadays a popular tourist spot for sunset views of the much bigger temple Angkor Wat.
More >>> 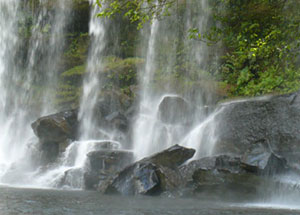 Phnom Kulen is considered a holy mountain in Cambodia, of special religious significance to Hindus and Buddhists who come to the mountain in pilgrimage.
More >>> 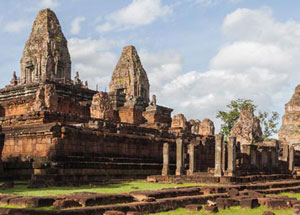 Located just south of the East Baray, or eastern reservoir, Pre Rup is aligned on a north-south axis with the East Mebon temple, which is located on what was an artificial island in the baray.
More >>> 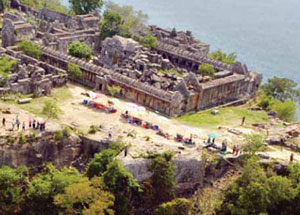 Affording a view for many kilometers across a plain, Prasat Preah Vihear has the most spectacular setting of all the temples built during the six-centuries-long Khmer Empire.
More >>> 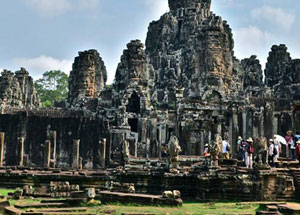 • Bakong is the first temple mountain of sandstone constructed by rulers of the Khmer empire at Angkor near modern Siem Reap.
• Lolei is the northernmost temple of the Roluos group of three late 9th century Hindu temples at Angkor
• Preah Ko was the first temple to be built in the ancient and now defunct city of Hariharalaya.
More >>> 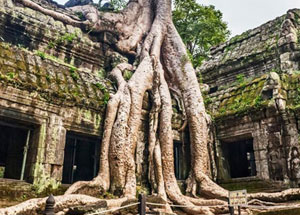 In 1186 A.D., Jayavarman VII embarked on a massive program of construction and public works. Rajavihara (“monastery of the king”), today known as Ta Prohm (“ancestor Brahma”), was one of the first temples founded pursuant to that program. The stele commemorating the foundation gives a date of 1186 A.D.
More >>> 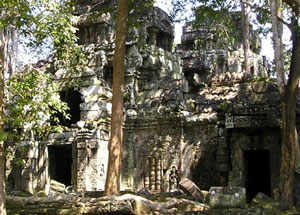 Ta Nei is a late 12th century stone temple in Angkor, Cambodia. Built during the reign of King Jayavarman VII, it is near the northwest corner of the East Baray, a large holy reservoir. It was dedicated to the Buddha.
More >>> 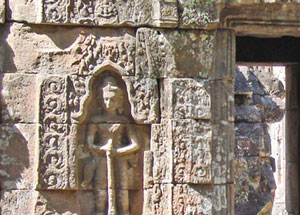 Ta Som is surrounded by a moat and enclosed by three laterite walls which are broken by two sets of gopura (entrance ways). The gopuras are cross-shaped and contain a small room on each side along with windows containing balusters. The main structure of the gopura are carved with four faces in the Bayon style.
More >>> 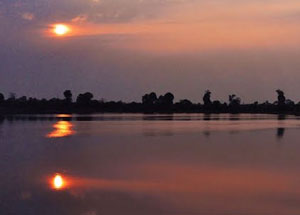 The West Baray (Clear water Baray) is a baray, or reservoir, oriented east-west and located just west of the walled city Angkor Thom. West Baray is the largest hand cut water reservoirs on Earth, possessing a current maximum capacity of 12 to 14 billion gallons of water.
More >>>